Scripted by the infamous Jess Franco (who was originally set to direct) this is one of the most reviled Zombie films ever made.

But is it that bad?

Well, we start as we mean to go on dear reader. Nudity. Lots of tight, firm, flawless, Euro nudity.

A young lady takes a walk outside, strips, lounges around and then takes a dip in the local sun-dappled lake (which is replaced by an obvious swimming pool with strategically placed water weed here and there for the underwater shots

which of course capture as much open legged naked detail as possible).

All is well with the World.

But what is this!? A green faced, underwater, Nazi zombie with murder on it's rotted mind that's what!

And before you can scream "refund", our nubile nymph has been dragged to her watery death.

When the town Mayor (Euro Trash veteran Howard Vernon) is notified of the missing girl he frowns a bit and says he will look into the matter.

A female Reporter named Katya (Gilda Arancio) arrives in the town wanting to do a story on the local 'Lake of the Damned' and so Mayor tells her the history of the lake.

During WWII German soldiers were billeted in the village and one of them fell in love with a local woman.

After a spot of fraternisation of the naked kind the woman became pregnant.

But the war catches up with them and Partisans wipe out the Germans and then toss the bodies into the lake.

But little do they know that the lake used to be used for ancient Satanic sacrifices of children (are we still following this?!) and thus the 'evil' waters go to work and that is why the soldiers are now terrorising the village.

Well no actually, and herein lies the big problem.

The Zombies are absolutely the worst looking excuses for the Undead you will ever see.

Smeared with bright green make-up, which normally stops at the neck and is s obviously rubbing off anyway, with the odd facial 'wound' here and there (which more often than not look like they about to fall off), they are truly pitiful creations.

We do have a unique Zombie movie moment though where one Undead fights another, but it's sadly a wasted idea due to the fight being so damn slow and dull.

Well we still have the gore right? Oh dear, not really.

All the Zombies do is grab their victims and proceed to nuzzle at their necks, dribbling blood from their mouths. We have no actual wounds and the Zombies spend much of their time pausing to grimace at the camera.

Although the 'aftermath' corpses do sport a few bite marks the close-ups ruin the effect where obvious pulsing of the neck can be seen.

This could have been a real Trash gem if the Zombie make-up and acting, prepare for some of the silliest 'zombie walking' ever, and the attack scenes had not been so lifeless (ha ha).

Only the welcome and oh so gratuitous nudity keeps the interest on any level other than a simple 'car wreck' fascination for just how bad it is.

And what fine nudity it is.

The highlight of which is when a vanload of female volleyball players arrive at the lake and decide to have a, essential to the plot, naked frolic in the water.

As our lovelies splash around with gay abandon Rollin's camera, closely followed by our silly looking Zombies, clinically zooms up between their legs.

As mentioned, the 'swimmimg pool' sequences really stand out for what they are, and at one point we can clearly see a dark, creased sheet covering the actual back wall of the pool and an uncovered (reflecting) wall to the right of the picture.

It seems the entire meagre budget went on the WWII flashbacks, with their uniforms, explosions and various army vehicles. Sadly though the action is so hideously and crudely staged all attempts to add a bit of gloss and sophistication to the proceedings fails utterly.

The proceedings are all scored with typically Rollinesque sombre organ music and the languid soundtrack, of strings and female vocal laments, from Jess Franco's "The Female Vampire".

The timeline is also shot to hell. The daughter looks about 13 or so, yet there seems no indication the film is set in the late 50's early 60's. This looks very much like the 80's. So she should be much older.

And why did the Zombies take so long in popping back up again anyway?

The characters are all cardboard and the acting bland, though some of the dialogue is entertainingly bad, like when the Mayor tries to rally the villagers after one of the Zombie assaults; "We better face the fact that the Zombies have declared war

we must find a way to safeguard our town against the mad, murdering zombies"!

The whole village aspect is full of unintentional laughs as well.

The best of which highlights the lack of any kind of basic Police and Coroner set-up in the place. The body of the first, land based, female victim is simply carried through town and dumped on the Mayor's doorstep with her dress pulled up and her knickers on display!

So here we are, back where we started. Is the film as bad as is made out?

There is some 'so bad it's good' fun here, the finale ups the pace a bit and the wonderfully gratuitous nudity (avoid the 'clothed version' for God's sake!) is most welcome and manages keeps you awake.

But as a whole this is really dull and above all really shoddy in its construction.

One for pubic hair lovers and Zombie completists only. 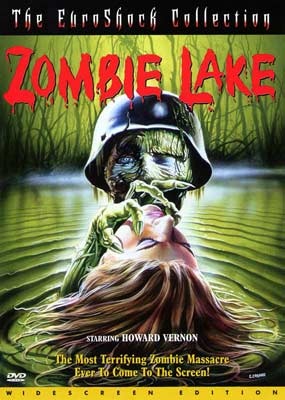