I'm really a sweet guy when you get to know me. I don't hate every new film I see. In fact, I enjoy the vast majority of films out there. I wouldn't be spouting off like I do if I didn't have a sincere appreciation for the art. But you have to admit, the pickings have been pretty slim in the past couple months. And I find myself once again giving the bad news to the people patient enough to read this. Just don't shoot the messenger.

THE 24 HOURS ran into trouble shortly after being completed. It had it's name changed to the extremely generic title, TRAPPED - a sign of the film's originality. Then, the cast seemed to shy away from doing too much press for the film, which wasn't screened for critics either. It made a paltry $6 million in the U.S., received mostly negative reviews and as I write this, is now premiering on video, a scant three months after being unleashed onto unsuspecting filmgoers.

Filmgoers like me, actually. I'm a sucker for these dark Hitchcockian thrillers and I typically don't let other critics (Hypocritical? Moi'?) or a film's box office performance influence my enjoyment of a certain film.

We open with an elaborate kidnap for ransom. Joe Hickey (Kevin Bacon) kidnaps the children of wealthy doctors and spends twenty-four hours with the families until they can get the ransom money. Why twenty-four hours? Well, in addition to being an admittedly neat excuse to generate tension, it also helps eliminate suspicion as the victims process the situation. "This is a machine that runs on fear," Hickey tells his victims.

Hickey has set his sights on Abby (Dakota Fanning - TAKEN, I AM SAM), the daughter of Dr. Will Jennings (Stuart Townshend), prominent anesthesiologist and conveniently the pilot of his own plane. Meanwhile, Will's wife Karen (Charlize Theron - DEVIL'S ADVOCATE, CIDER HOUSE RULES) is a stay-at-home mom, who seems to spend her days happily dishing out ice cream for her offspring.

Abby is taken and Joe tells Karen to sit tight as they play house for twenty-four hours. Joe basically watches her and tells her there is no escape, and as always, puts the moves on the good doctor's wife.

This is just one of three set-ups in the film. Will, who is away on business, is also kept at bay as he is held at gunpoint by Joe's wife, Cheryl (Courtney Love). Meanwhile, Joe's cousin, Marvin (Pruitt Taylor Vince - HEAVY, MUMFORD) watches Abby, trying not to threaten her as he is himself emotionally a child and doesn't want to hurt anybody.

So, we have three different set pieces. In a more competent film, this would be three opportunities for some amazing interpersonal dialogue and psychological turmoil that would slowly begin to link together by the end. This is not a competent film. There is no psychological turmoil other than the fear the Hickeys instill in the parents. Granted, for someone in their position, that must be the most terrifying thing in the world. But we just don't feel it on the other side of the screen. Everything is too pat and the chemistry, important in setting up dynamics of fear as well as romance, is mostly absent.

For his part, Bacon does an admirable job. He hams it up in some points, but no more than the script leaves open. It's not a fantastic performance but it shines in comparison to Theron, who doesn't even try. Remember, Theron was nominated for an Oscar a few years back, but you'd never know it from this performance. She goes through the paces, acting aggressive and angry but never really resonating with anything you wouldn't see in some of Lifetime's "women in peril" TV movies.

But this can be forgiven, since Theron is only one of two Oscar nominated actresses who under-performs. Theron's performance may be generic, but it's not horrible. Love is horrible.

Now, I don't like to get on the anti-Courtney Love bandwagon. I actually was blown away by her performance as Althea Flynt in THE PEOPLE VS. LARRY FLYNT. It was the most incredible performance I saw that year. Unfortunately, Love has a tendency to drag her feet when it comes to her creative output. Her albums (which I really enjoy) are few and far between and her acting roles have been so small and inconsequential, I start to worry that her FLYNT performance may have been a fluke.

Of course, even Love does not fare as poorly as Stuart Townshend. This and his turn as Lestat in QUEEN OF THE DAMNED are two of the worst performances of 2002. He shows such a lack of charisma and emotion that I wonder how he was given the keys to the Hollywood kingdom. Here, his facial expressions do not change more than a few millimeters whether he's expressing happiness, worry or rage. The character itself it too flawless and Townshend doesn't help matters any with his lame delivery. He brings such a sense of righteous indignation to his scenes that his scenes would be unintentionally funny if they weren't so pathetic.

The Love/Townshend scenes play sloppy anyway. They consistently feel like a third and unnecessary storyline that the film would be much better without. The only reason they are here is to leave the door open for a final act that defies all sense of plausibility.

I've spent so much time on the poor performances, I have not mentioned that there are two winning supporting roles here. Marvin, while being Joe's puppet, is also family and one of the only people he trusts. I honestly believed in the affection they shared for one another. Vince portrays Marvin as a caring human being who does not like to see anyone suffer. But he goes along with Joe, because without him, he would be completely lost in loneliness, confusion and despair.

Another face to watch is Dakota Fanning, who I swear is a 40 year old in an eight year old's body. She shows a maturity and talent in her youth we haven't seen since the early roles of Jodie Foster. It's a shame Fanning and Vince are both given such horrible dialogue in their scenes together. Having Fanning deliver such powerful emotion and then having to say lines like, "My cat is in heaven," is an emotional roller coaster no child should have to bear.

John Ottman's score is worth mentioning as well. Ottman creates a Hermann-esque soundscape that deserves a better film to accompany it.

This is a film that relies heavily on enclosed spaces and interpersonal contact. It wants to recall films like THE DESPERATE HOURS and REAR WINDOW, but it doesn't begin to tap into what made those films so great. They created tension because of a bond between the people in front of the camera and the people behind it. They were not afraid to take chances, to push the envelope, knowing that in order to make the formula work, they would have to put everyone in such horrible peril that the psychological horror would be far worse than any action sequence.

There is none of that here. No tension whatsoever. So we do get action sequences. Theron threatens Bacon, who threatens her back. Townshend wrestles Love to the ground who wrestles him right back. Screenwriter Greg Iles, who amazingly adapted his own novel, seems intent that the very idea that a child is being held for ransom should be enough to hold us in suspense. It isn't because Abby is actually smarter than the adults in the movie. Iles thinks that invasion of privacy by these criminals is enough. It isn't because they are given such cookie cutter characters that they don't project the menace or the intelligence to be truly threatening.

So we get a number of cliche's thrown in for good measure. For example, Abby is made an asthmatic, a contrived plot device. Not only have we seen the "kid needs medicine" angle in superior films this year alone like PANIC ROOM, but the asthma thing has been done to death in everything from HAND THAT ROCKS THE CRADLE to THE GOONIES. In fact, the interior scenes are such a dead end that in the last thirty minutes, everyone goes outdoors where we have not only a car chase but a ridiculous plane chase as well. TRAPPED's third act is clumsy in every way imaginable.

The main problems behind the film are the writing by Greg Iles and the direction by Luis Mandoki (ANGEL EYES, WHEN A MAN LOVES A WOMAN). They rely on restraint just when they should be pushing the film as far as it should go. Many times, it's wise for the filmmakers to pull back a bit and let people's minds do the work. But in order for that to work, our minds need something to work with. 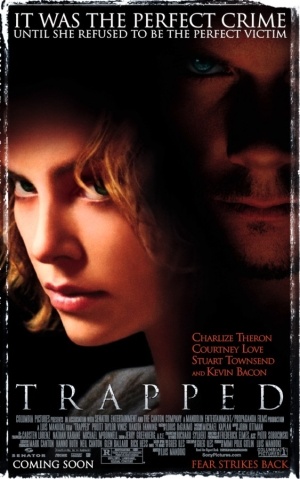