It was inevitable that sooner or later, M. Night Shyamalan would succumb to underwhelming box office and critical response. THE SIXTH SENSE was such a smash hit and if UNBREAKABLE didn't set records, it earned him a lot of respect. The response to SIGNS was nothing short of a phenomenon. THE VILLAGE will not do as well as these films, but the people who are falling all over themselves calling Shyamalan a failure are really just making fools of themselves. Because the thing is, THE VILLAGE isn't bad at all.

The film was originally titled THE WOODS before it was pointed out that Lucky McKee (MAY) had dibs on the title first. Just as well, since the story really isn't about the mysterious woods but about the village that lies in their center. The village harkens back to a simpler time, where the community worked for one another and people asked the blessings of the town elders before they got married. It seems downright utopian in its innocence.

The community is similar in structure to some of the original Mormon, Amish or Mennonite settlements. But there is no mention of a God to make the townspeople fearful, nor is there any emphasis on money or standing. What they have in place of a fear of God is a fear of creatures so vile, they are never referred to by name. The town lives in such fear of these creatures that no one dares cross the lighted boundaries of the town. People stand guard in towers at night, watching for any movement after everyone has been locked safely inside. Most of all, no one brings out the color red, which is said to attract whatever lives in the woods.

Like most of Shyamalan's films, the less you know about the film going in, the better. To explain more would be to spoil a story that the viewer is meant to discover only when they're in the thick of it. Just as well, since most of the film focuses on the the people of the village and how they interact with one another.

Our strong, silent protagonist has the Steinbeckian name of Lucius Hunt (Joaquin Phoenix - SIGNS, GLADIATOR). He doesn't talk much, but he's a good person who works hard. He also has an adventurous spirit and often dreams of venturing into those woods. Ivy Walker (Bryce Dallas Howard, soon to be in Lars Von Trier's MANDERLAY) is the blind daughter of town elder, Edward Walker (William Hurt). She's often labeled a tomboy, but in fact she actually seems to be a bit of a kook. She doesn't talk like anyone else in the village. She's friendly and carefree and may even posses some extra-sensory powers given her unique perspective on the world. Noah (Adrian Brody) is a mentally handicapped man with a childlike innocence but quite a bit of strength.

Something no one comments much on about Shyamalan's films is how he uses an overwhelming sense of awkwardness to his advantage. From THE SIXTH SENSE on, Shyamalan's dialogue has never really flowed in a fluid sense. He has a strange choice of words when writing for his characters and makes the most of extended periods of silence. Remember how odd UNBREAKABLE seemed at first, with the muted conversations and uncomfortable pauses in between stretches of dialogue? It almost seemed as if the actors themselves were unsure of what they were saying. But in retrospect, it fits. THE VILLAGE continues this trend and even amplifies it a bit, so that the effect can seem a bit disarming at first. Everyone speaks in a tongue that feels half like 19th century America and half Shyamalan's carefully crafted strangeness. Once again, in retrospect it fits.

Shyamalan has also gathered another amazing cast. This is the first of his fantasy-horror films (assuming most of us never saw his PRAYING FOR ANGER or WIDE AWAKE) to focus squarely on a younger generation of townspeople - namely Lucius, Ivy and Noah. This is not accidental as the entire film hinges upon the children deciding whether to break the laws of their elders. So instead of Willis, Jackson and Gibson we are left with Phoenix, Howard and Brody. Which is not to say there isn't some amazing work by the town elders who not only include Williams Hurt (finally getting good roles again), but also Sigourney Weaver and Brendan Gleeson.

Phoenix plays a shy and reserved man, who nonetheless comes across as a feeling and noble person. His Lucius has all the earmarks of a heroic figure who does not do much in the line of out-and-out heroism. It's a fine performance, Phoenix's best since QUILLS, which was my favorite film of 2000.

Relative newcomer Bryce Dallas Howard is a revelation. She may be Ron's daughter, but she seems picked out of relative obscurity after Shyamalan saw her perform on the stage. As Ivy, she's bohemian before her time. At first her odd ways and speech patterns made me wonder about where the character is going. As the film progresses however, I realized that not only did I like Howard in THE VILLAGE, but that she was the best thing in the movie. It's a surprising move giving such a plum role to a non-marquee name, but Howard turns in one of the best performances of the summer.

On a purely personal level I would like to commend both Howard for her performance and Shyamalan for writing the part so well. While it may seem a bit hackneyed to have the blind girl be so capable, it really isn't that far fetched. THE VILLAGE does a better job than most at showing a blind protagonist who is truly capable, often moreso than her sighted peers. At one point Lucius asks her if she ever minds not being able to see. It struck a chord because while I still have most of my sight, I have been asked this same question almost weekly for as long as I've lived. Her response is perfect, telling Lucius that she sees the world, just not in the same way. Corny? Not at all, since I myself have said this and I have had many blind friends who have said these exact words.

One major problem however comes from an unlikely source. Adrian Brody, who was so good in THE PIANIST, SUMMER OF SAM and hell even OXYGEN, does an absolutely horrible job in the role of Noah. He plays the mentally impaired role much the same way we've seen the role played before. Moreover, he completely fails to illicit the necessary emotions from the audience. It's a very good actor turning in an abysmal performance.

What caught me off guard more than anything else in THE VILLAGE was the ending. Not because it was another of Shyamalan's amazing twists, but because it was the first of his endings I saw coming a million miles away. When I heard gasps in the theatre, I was honestly surprised. While THE SIXTH SENSE and UNBREAKABLE (my favorite of his films) left me in a state of shock, this one seemed plainly obvious.

This turns out to be a double-edged sword. On the one hand, Shyamalan's trademark moment of surprise is dulled. Being able to connect the dots is something I have rarely been able to do with one of his films, at least not on the first viewing. Hence, the overall effect of the film is dulled down from what was intended. I actually worry about Shyamalan trying to squeeze in a twist for every time. I did not predict the entire ending for SIGNS, although the role played by Abigail Breslin did everything but leave breadcrumbs leading to the solution.

Fortunately, the ending he does choose for THE VILLAGE, exactly the way it should have ended. Furthermore, the positive effect of seeing the ending coming allowed me to forget about Shyamalan's endings for once. Too much emphasis has been placed on the last ten minutes of his films and the strain is starting to show. This gave me a chance to appreciate the first 90 minutes the first time out.

THE VILLAGE is not the classic that THE SIXTH SENSE or UNBREAKABLE were, but it's nowhere near the dog some are making it out to be. It will make enough to break even, but even more importantly, it will get a new life once it hits the home market. Much less a horror film that SIGNS, it nonetheless is a decent fantasy with a complex message. 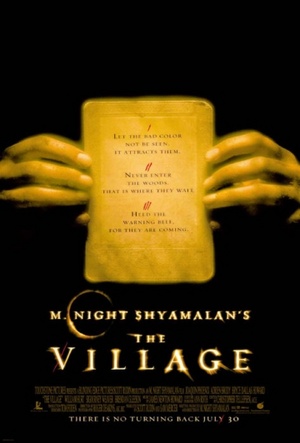