Starting in the mid-fifties, Hammer Studios began to return to basics and schooled filmmakers in the rest of the world as to what they were losing. Horror films, which started as gothic and romantically haunting pinnacles in filmmaking, were becoming tedious.

During the decade, they had many films that used similar formulae including juvenile delinquents, the Red Menace and atomic age terrors. All this was great for a while and there are a lot of gems from this period. But soon the same themes were hammered down (no pun intended) ad nauseum. Ironically, the more they tried to be timely, the less relevant they became. Then comes this British upstart to make everyone do a double take.

Hammer quickly developed a reputation for presenting the horrors of Universal with an edge. They took the standard monsters from Universal's thirties and forties, and infused them with a new spin and great imagery. Now in full color, but no less beautiful, people were reacting the same to Cushing and Lee as they did Lugosi and Karloff decades earlier.

THE MUMMY continued that tradition early on. We open in Egypt, where an archeological dig for the British Museum is uncovering the tomb of Princess Ananka. No self-respecting horror film ever has the protagonists take heed of ancient customs, so the tomb is opened and the curse is unleashed. Everyone comes back alive but a little worse for wear - Joseph Wemple (Raymond Huntley) is shaken but fit, John Banning (Peter Cushing) has a broken leg from an earlier mishap and his father, Stephen Banning (Felix Aylmer) is in a state of catatonic shock. As they decide to cut their losses and depart, the evil Mehemet Bey (George Pastell) vows to rid the world of the infidels that defiled the tomb.

Mehemet is one of the last remaining followers of Osiris, the god who ruled over Ananka. The legend had it that when the princess died, her lover tried to resurrect her. In life, the high priest Kharis (Christopher Lee) and Ananka (Yvonne Furneaux - LA DOLCE VITA, REPULSION) had loved each other deeply, but because of their different stations, neither could act on their impulses. In death, however, she was free of her royal bonds. Kharis is found and punished horribly. His tongue is cut out and he is buried alive. For millennia, Kharis serves as the protector of Ananka's tomb, guarding his love but bound to whoever possesses the Scroll of Life.

Guess which lucky Egyptian zealot gets his hands on that?

It takes years, but Mehemet is eventually able to make his way to London, giving Kharis a new watery grave and sending him out to dispatch the members of the archeological dig.

As Kharis, Christopher Lee only has a few more lines than he did as the Frankenstein monster. He also spends most of his time in dirty bandages. Therefore, he is forced to convey the role mainly through his eyes and posture. Many would be content to lumber along but Lee always brought more class to the table than he was asked to. Hence, his sorrowful eyes and lumbering, tortured movements actually convey a strong sense of sympathy for Kharis. In life, he was a tortured priest, in death the unwilling pawn of his perverted follower. Kharis is not inherently evil. Mehemet Bey is.

Giving the mummy a neutral role is the cleverest touch by director Terence Fisher. The villain here is a human, driven by servitude, barbaric training and pure vengeful hatred. In this role, Pastell is certainly threatening and Lee makes for a strong contrast, acting against his will, but acting because he has no choice.

On the other side is Peter Cushing as John Banning, who must battle the monster in the end. Through much of the film, Cushing is trying to figure out the mystery and showing great sadness for his father. Cushing gives a touching performance that seems quite natural for someone put in such an unnatural position. When he needs to take action, he does so with great fear but with no less cautious assertiveness than you would expect from his background.

The best scene has Pastell and Cushing debating each other, trying to extract knowledge from one another, but each wanting to retain their honor. Although each knows who the other is, they both play dumb so the insults are subtle. The two take a perverse pleasure in one-upmanship. Pastell ridicules Cushing's reliance on practicality and his disrespect for culture and history. Cushing breaks down these arguments and suggests that surely no one would be foolish to follow an insignificant god, so low on the totem pole as Osiris. It's a wonderful scene where the sparks just fly off the camera.

A major sticking point for me was the use of some obvious padding in the film, most notably in the flashbacks. While the origin story is important, going through every last detail and custom of Egyptian burial is not, and it brought the film to a complete halt. Likewise, the replaying a couple scenes we had already seen. The scenes were extended a little each time, but one has to wonder if they couldn't have been trimmed somewhere.

Yet, everything moves at a dizzying pace towards the end. Fisher even manages to throw in the obligatory drunkards from the local pub. An archetype in classic horror, the drunks are there for three reasons: comic relief, to begrudgingly supply information and to become unwitting accomplices of the forces of evil.

THE MUMMY is another fun film from the folks at Hammer, filled with great characters, a solid script and absolutely beautiful art direction. It may not be their greatest achievement, but remember how new they were to the scene at the time. This was the shape of things to come from this studio, and what a wake-up call it must have been. 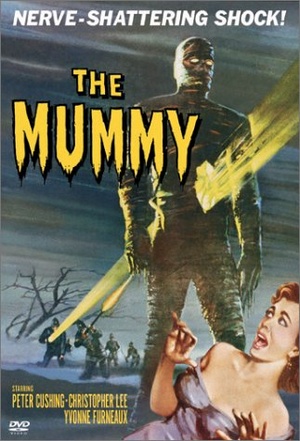