Edgar Allen Poe was undoubtedly the best thing to ever happen to the world of horror. But like H.P. Lovecraft, his work in its purest form has rarely translated well to film. The average Poe story on film would last a total of fifteen minutes at the very most. The terrifying set-pieces that the stories and poems were built around are effective but often too abstract to build an entire film around.

Nevertheless, filmmakers from all eras and nationalities have done their best to bring both Poe and Lovecraft to the big screen. This has often involved the controversial technique of taking the basic story as an inspiration for a far more ambitious, although not necessarily more effective tale. For the record, I am a big fan of many on-screen Poe adaptations, but the approach has been to use the story as a premise for a larger work.

I've always thought it strange that the Poe story that gets adapted with increasing frequency seems to be "The Black Cat" (a cursory look shows that "Fall of the House of Usher," "Pit and the Pendulum," and "Murders in the Rue Morgue" are the other popular adaptations). A minor if memorable turn in the Poe canon, the story has been adapted by Dario Argento, Lucio Fulci and Roger Corman, among others. Even Luigi Cozzi turned one of his films into a "Black Cat" adaptation, although not by choice. Edgar G. Ulmer's THE BLACK CAT was not even the first time the story was filmed. But although it is not THE first, it is A first for any other number of reasons.

Peter and Joan (David Manners and Jacqueline Wells), a saccharine and frankly annoying young couple, are traveling by train when they meet the mysterious and exotic Dr. Verdeghast (Bela Lugosi). He tells the couple that he is returning home, after spending fifteen years in prison. His homeland was sacked and demolished, as he was taken as a prisoner of war. Joan, he says, reminds him of the lost love he left behind. He's charming if a little odd and offers them the chance to accompany him to his destination when the train derails.

Verdeghast takes them to the castle of Hjalmar Poelzig (Boris Karloff). The old theme of "appearances can be deceiving" goes into overdrive here, as the huge estate looks ancient from the outside but very modern on the inside. The angles and exquisite designs are an explosive meeting between the past and future. As Poelzig, Karloff is given a decidedly sinister entrance as he slowly rises from his bedchamber, shrouded in shadow.

Peter and Joan feel the need to leave the estate as soon as possible, feeling they haven't been told everything. And indeed they haven't. For one, Verdeghast seeks revenge against Poelzig for stealing his love and leaving him to die in a prison camp. Also, Poelzig is a Satanist who plans to make Joan the sacrifice in his Dark of the Moon ritual.

So, Verdeghast and Poelzig begin their game of death with Peter and Joan unknowing pawns. Poelzig is an amazingly evil man, who illustrates many shocking attributes for such an early film. He treats life and death as a game and is willing to sacrifice anyone to the Reaper. He proudly proclaims his love for Satan. Most shocking of all, he keeps a secret mistress in his bedroom, his very own daughter spawned by Verdeghast's lost love. I can't imagine this incestuous relationship went before the censors without notice.

Even most film historians have neglected to include Edgar G. Ulmer amongst the forgotten geniuses of their time. Before he faded into obscurity in the 1960s, this man infused ordinary films with pure adrenaline. As a result, we have a number of filmmaking milestones to look back on - the birth of the B-movie noir with DETOUR for instance. Ulmer did have many forgettable films to his credit but he always seemed to bring something extra to the table.

THE BLACK CAT could have easily been a standard horror shocker and it does have some time-worn elements. The soundtrack is on almost continuous play, a relic of when the industry was still tickled with the idea of "talking pictures." Manners and Wells are inherently dull people. Wells screams relentlessly in the film's final minutes and Manners is a poor example of the masculine hero, as evidenced by his bone-headed actions towards the end.

But the ambiance of Poe must have been an inspiration to Ulmer, even if the film is an extremely loose adaptation. His take on the story (with only a few fleeting appearances by the title animal) is an amazingly eerie film, which pulls out every trick in the book. THE BLACK CAT is Ulmer's first foray into the genre and it's a unique looking film from the era. Everything is given an air of menace and mystery. Ulmer takes a formalist approach, mapping the landscape as one laced with terror.

Poelzig, an architect in the film, is also named after a famous occultist architect. Likewise, his house is a combination Fortress of the Future and Chamber of Horrors. The layout, with its use of shadow, angles and exaggerated structures, owes as much to German expressionist films as it does to art deco architecture. All of this culminates in the intensely stylish Dark of the Moon ritual that looks like some of the best silent work of Fritz Lang and Robert Wiene brought into the era of sound.

Of course, the major selling point of the film is the opportunity to see the legends of Boris Karloff and Bela Lugosi face off on the big screen together. To my knowledge, this is the first time they ever collaborated in a feature film and what a showcase it is. We haven't had any stars in the genre making films for the big studios for a long time, and the work here reminds us of what we're missing. This was a time when these thespians were treated like artists, before Universal and their ilk threw them to the wolves. It's Karloff and Lugosi in their prime and each is given their chance to shine.

It could be argued that Karloff is given the bigger part. Sporting the most overstated widow's peak in cinema history, his Poelzig is astoundingly cruel and menacing. No misunderstood monster here, his character is pure evil and Karloff fills it with gleeful menace. Despite his lofty prophesying, he shows the depravity of a sexual predator. As he looks on Joan with lust, he grips the arm of a nearby fertility statue, tighter and tighter. To add to his perversity is the aforementioned affair with his daughter, an affair he throws in Lugosi's face when the time is right. Truly an amazing performance and one of the more memorable screen villains of the era.

As Verdeghast, Bela Lugosi is also fantastic. In a time before Lugosi sank into depression and drug abuse, he shows incredible class. The scene in which he confronts Karloff, bringing over a decade of hatred and vengeance out in the open, is truly a sight to behold.

For people who had such a legendary feud, they compliment each other very well. As well they should, since each character is haunted by his own past and the spectre of death. As Poelzig says to Lugosi, "Are we not both the living dead?"

These people were not just Halloween masks or pop icons. They were artists. Films like that prove this and thus should be seen and appreciated. One of the best Universal horror films, THE BLACK CAT is a lost classic from an era of elegance. 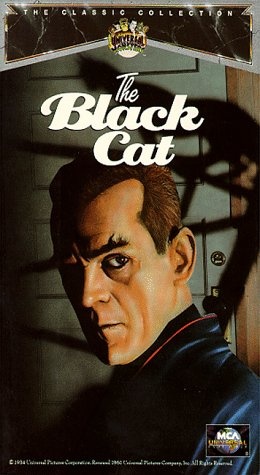