the Zombies In La Horde Are Mean, Nasty, Gnarly Bad-Asses With Teeth Like Piranhas

LA HORDE, or THE HORDE as it was called for a US audience that probably got confused, is an unreserved comic book action film with zombies. In a good "making of" documentary extra, French directors and writers Benjamin Rocher and Yannick Dahan were unabashed in their aims, declaring they wanted foremost to make an action film from the 80's that was over the top, excessive and foremost very European-centric. Whilst they loved zombies they cared little of established genre traditions, especially the US Romero flavour, they would make the zombies work for the action and not visa versa. I'm in the camp that says genre conventions are there to be broken or else there is the danger it would all become stale. I look forward to seeing new things being tried, and in all honesty having now watched some of the most visceral, brutal zombie scenes I've yet seen, I really don't think they don't care about zombies.

For all the blood, gore and genuine attention at making up the zombies to look as evil and dangerous as possible, the comic book over-tone somehow makes the film actually not that scary

LA HORDE doesn't waste time. Four Parisian police offers covertly infiltrate a dilapidated, high rise on the outskirts of town to take revenge on a crime boss who has killed one of their own. They get it hopelessly wrong, get captured and then without warning the end of the world falls down on all of them a like a proverbial ton of shit-bricks. It's visceral, impactful, shocking and sudden. One second they're at odds, police vs gangsters, and I even had to quickly check the box to see that I'd gotten the right film, that it wasn't an action cop film, the next the world is literally trying to break their door down and brutally slaughter and eat them. 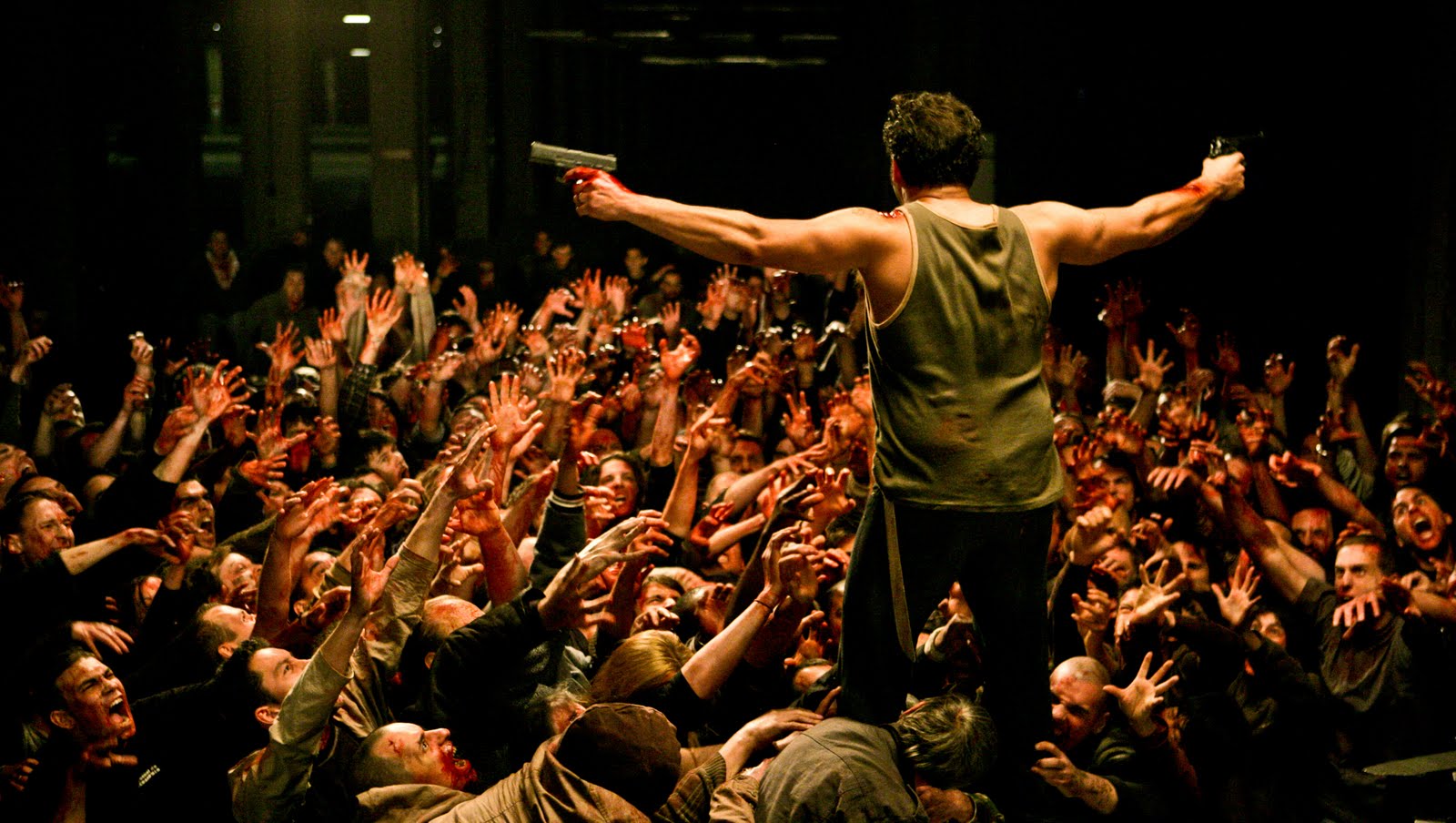 The zombies in La Horde are mean, nasty, gnarly bad-asses with teeth like piranhas. They're as quick as those in Boyles' 28 DAYS LATER but stronger and more vicious, sadistic and unrelenting. And whilst I'm used to the shooting-them-in-the-body-has-no-effect - got-to-shoot-them-in-the-head trope, I've never seen it played out quite so extremely. Rocher and Dahan weren't kidding when they said they wanted over the top comic book action. From their first appearance every encounter is frantic, on the edge, visceral and very, very bloody. With frenetic camera work, with shake, speed-ups, breaks and strobe effects, the feeling of panic and desperation is pervasive and adds brilliantly to an unremitting pace. It reminded me a lot of REC which came out while they were shooting.

For all the blood, gore and genuine attention at making up the zombies to look as evil and dangerous as possible, the comic book over-tone somehow makes the film actually not that scary. The over the top fight scenes, and heavy reliance on hand-to-hand combat, with excessive use of head butts, speeded up and repetitious hit-sequences. give it all an almost surreal, comical feel. You know those sequences in Tom and Jerry when Jerry would hit Tom with a frying pan over and over in a loop; they're like that. The film really is also, when all said and done, just a sequence of these scenes too, with the time spent in between just short breathers before moving us quickly onto the next. It's all highly stylised with original touches of flourish, and immaculately shot but it's all a little shallow and you wonder whether they should have been a little more ambitious.

A tight, claustrophobic high intensity action zombie film, La Horde is a relentless assault of the senses. As bloody and gory as anything else out there it's comic book feel dampens the scares to leave more of a smile on your face than a feeling of discomfort. With some ludicrous over the top scenes and an audacious finale it's certainly very enjoyable though - with memorable characters and dialogue. LA HORDE is a recommended bloody roller-coaster ride that taught me two things. One: that whilst I entertain a longing for the zombie apocalypse, in reality, it probably wouldn't be very nice. And two: never fuck with a Nigerian.

An end of the world battle between gangsters, cops and zombies.