Evil Breed: The Legend Of Samhain

It is hard to distinguish where Christian Viel's SAMHAIN and the atrocity called EVIL BREED begins. All reports say that they are two completely different films. The film we wound up with is not the one that Veil started. Which is good because if it were, he'd be hanging his head in shame.

The story goes like this: a few years ago, Viel came up with an idea for an old school horror film called SAMHAIN. It had a traditional "kids in the woods" plot, sort of a FRIDAY THE 13TH crossed with THE HILLS HAVE EYES with a foreign setting exotic enough to recall nothing except maybe DEMENTIA 13. As an interesting gimmick to sell the film, he peppered the cast with former and current adult stars. Mingling with the standard exploitation crowd was the likes of Ginger Lynn Allen (a.k.a. Ginger Lynn), Chasey Lain, Taylor Hayes and the ultimate adult superstar, Jenna Jameson. Oh yeah, and they got Richard Grieco as well because I guess they caught him sifting through a dumpster on set.

Time goes on, and on and on... where the hell is SAMHAIN? While we have nothing concrete to base these reports on, it seems that the project ran into projects during production and ran into much more in post-production. While some of the actors were great to work with, others (rumors suggest Chasey Lain) were difficult. While the film was shot way back in 2002, it sat on the shelf. In post-production, Viel looked for distribution. You'd think with a low budget, proven formula and adult star cast, it would have been a slam dunk, but I guess not. The film was finally sold to Lion's Gate, who has been a big friend to horror in the last few years. They also release a lot of cheaper horror films on the straight-to-video market. SAMHAIN became one of these, but what isn't clear is why the film got raped and pillaged in the process.

Lion's Gate, who has taken some real chances on horror films like THE DEVIL'S REJECTS, HIGH TENSION (a.k.a. HAUTE TENSION), SAW, HOSTEL, and the upcoming HARD CANDY for some reason took a meat cleaver to Viel's film. The 91 minute shocker was cut down to a mere 78 minutes. What's more, many websites are reporting that several scenes were re-shot without the supervision or approval of Viel and thrown into the film. So, what we have is a patchwork between a mangled edit of Viel's film and new footage that some unnamed auteur decided to bless us with. This decision makes absolutely no sense to me. If they were looking for theatrical distribution, one could understand making a few cuts to appease the MPAA. It's not a process I'm particularly fond of, but it is done often enough and usually results in no more than a couple minutes of snipping. But this is the anything goes world of DVD, where you don't have to cow-tow to a ratings board and in some cases, the more extreme your film is, the more it is assured a success that stands out from the rest of the crowd. Why would you neuter of film destined for such a market?

As it stands, there is some gore in the newly retitled EVIL BREED: THE LEGEND OF SAMHAIN. But other shots are cut so short, we aren't even sure how or when certain characters are exterminated The film has not only lost its guts, both literally and figuratively, but it has also lost a good chunk of its brain, assuming it had one to begin with.

What we have here are a group of annoying teens on a field trip to Ireland, which looks suspiciously like Canada. Here is where I think at least some of the problems existed before any cutting took place. Horror has always had a problem presenting us with three-dimensional characters, particularly when those characters are young people about to be carved up. The dialogue of this group is atrocious. Of the five kids, four are horny for each other which leaves one frigid girl. Who do you think will be the last one standing? Unable to come up with anything to contribute for the next twenty minutes, the characters resort to the most inane name checking of horror films. Note to filmmakers: there is homage and then there is stupidity. Dropping a couple names or showing a visual cue or even occasionally recalling a vague theme is homage. Mentioning movie titles and directors for three consecutive scenes is stupidity. It does not show us how clever you are. It does not show respect to your influences. It just presents us with a long list of films we would rather be watching.

The group is there to look at some ruins, but their days really aren't that packed. Instead, they spend most of the time just hanging out. They encounter Gary (Simon Peacock), the local groundskeeper who "surprise, surprise" just happens to be completely bonkers. This is an important character to point out, because Peacock employs one of the most humorously bad accents I've ever run across. A few sentences from him was enough to send this critic into fits of hysterical laughter. Gary continually warns the kids "Y'ar caaan't stray from th' path" and doesn't understand why the kids just roll their eyes and move on. If you would like to compare this performance with something, check out Patty O'Brien, the Irish villain from the first AUSTIN POWERS film. Yes, we have a match. Any second, I expected Gary to exclaim, "Tharr' always after me lucky chaaarms." A few scenes later, Gary's cousin, Pandora shows up. Pandora is played by Ginger Lynn, credited here under her "legitimate" full name "Ginger Lynn Allen." Lynn is one of the greatest adult stars of all time and the vast majority of reports have her pegged as a pretty great person as well. My point being that I mean no disrespect when I say, we all know what most of her resume looks like. She has had more success in mainstream cinema and television than most of her counterparts. But she has rarely had to tackle any kind of ethnicity. Therefore, it's not for nothing when Pandora shows up with a light Irish lilt in her voice that is at once convincing. It sounds especially good as she delivers her lines next to Peacock who is silently mugging for the camera.

Pretty soon, the group starts getting cut up and eaten. And thank God for that because really I couldn't stand much more of them.

The villains of the film are the alleged offspring of the infamous Sawney Bean clan, still inbreeding, still cannibalizing and to quote the song, still crazy after all these years. The clan doesn't look human and they don't look quite monstrous either. More than anything, they resemble people with a bad back who accidentally fell into the fryer at the local White Castle. Also, despite being horribly deformed about the face, the Beans have somehow managed to keep perfectly manicured hands. "But wait," the more astute of you is noting, "what does the Sawney Bean family have to do with the ancient pagan holiday of Samhain?" I'm glad you asked that dear student, because the answer is... absolutely nothing!

The cannibals, called "the Shapes" in the credits as an obvious nod to HALLOWEEN, aren't very consistent Some of their victims are dragged back to their cavernous lair while others are left in amusing places, ripping a page from the Jason Vorhees School of Interior Design. Although one unlucky stiff talks about needing breeders, that still does not account for why several men are also brought back to the caverns, or why some women are left behind.

As a matter of fact, continuity takes a permanent vacation once EVIL BREED gets going. Day switches to night and back again like an old Ed Wood film. More noticeable is that every character has at least one instance of getting from one location to another in record time with no explanation whatsoever. The walls seem to be incredibly thick, since one scene has someone getting loudly butchered on one side of the door while the victim's acquaintance can't hear anything on the other end. I'd love that kind of soundproofing in my house. In another scene, a few rotting pieces of wood are enough to keep mutated killers with super-strength at bay, even though they are armed with machetes. The cherry on top is an ending which comes completely out of left field, defying all sense of logic. Someone had the good sense to insert some gratuitous nudity to take our minds off of how inept everything was, but it doesn't quite work.

So, if the film is swiss cheese and the kids give horrible performances, how do the adult actors stack up? Well, the only one to really make an impression is Ginger Lynn Allen, since she is the only one given more than a couple minutes to work with. As mentioned, she does a pretty good job. Although the box art proclaims "Cannibals Wreak Havoc On Jenna Jameson!" (and incidentally, that should have been at the top of the front cover to increase sales), the truth is that Jameson is given very little screen time in a pretty incidental part. I am sure that if given another chance, she could do a fine job in a genre film, but the people behind EVIL BREED didn't capitalize on the gold mine they had in their grasp, so it all remains speculation. Taylor Hayes' scene is rather disturbing and probably could have been amazing if it wasn't bookended by such rottenness. Like Jameson, I hope to see more of her in the future. It's hard to tell where Chasey Lain was at in her cameo but she really didn't seem to care all that much.

The merging of adult and horror is a natural. First of all, the only genre more marginalized than horror is the adult film. Many like to think they are above it, but the $10 billion it rakes in annually must come from somewhere. Many adult actors and actresses have been successful in the world of horror. The incomparable Marilyn Chambers starred in David Cronenberg's RABID. Robert Kerman of CANNIBAL HOLOCAUST was better known as R. Bolla on 42nd Street. Even adult's ultimate scarlet "A," Traci Lords came up with some modest success in the genre. Why it was not exploited further here is anyone's guess.

As I said before, it's hard to know which of the film's faults came from Viel's production and which came from Lion's Gate's hatchet job. If anyone has any further input into what Viel's cut contained, I would love to hear it. Better yet, I would love to see Viel's original cut, to give it its day in court. I understand there are copies floating around the internet, but I haven't come up with any lately. I had been following production of SAMHAIN since it began. Right away, I wanted to see it and I still would.

As it stands, EVIL BREED is a partial birth abortion, the biggest unintentional laugh riot so far this year. Go here for laughs, not for scares. However, if you ever wanted to see Richard Grieco drawn, quartered and roasting naked on a spit, I have just the movie for you. 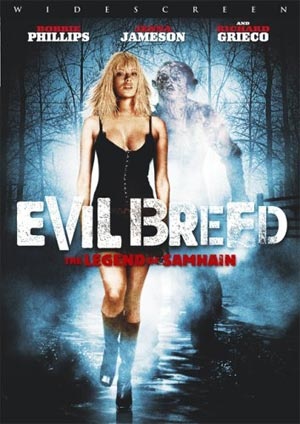