I don't blame people for being skeptical of the independent horror scene, especially those that bypass theatres altogether. On second thought, actually I do. Because while there are a ton of horrible films cluttering the shelves of your local video store, there's also some real gems in there as well. By dismissing them altogether you miss out on seeing something truly amazing like Jon Keeyes' AMERICAN NIGHTMARE.

This is the type of film that makes all those movie marathons pay off. Sitting through a dozen mediocre films suddenly seems worthwhile when faced with something as stunning and original as this film.

Everything about this film caught me off guard. It starts out like any generic slasher. A group of kids gathered in the woods on Halloween, casually mentioning being questioned in a murder investigation. But then, through some misdirection, it turns into a shocker of a pre-credit sequence. This is particularly true when Debbie Rochon comes on the screen and unleashes her murderous spree with a horrifying primal rage you just don't see anymore.

Rochon plays Jane Toppan, a woman we never really learn too much about, just enough to make us ask even more questions. A year after the murders, she is still at large. The police never caught on to her, but she's not done playing yet. The thing is, she doesn't seem to be picking her victims indiscriminately. She has specific targets and specific reasons for her actions.

One year later, a group of friends are gathered in their little cafe hangout before most of them heads off to a Halloween party. In the group are the two surviving sisters of one of last year's victims. They sit around, playing their little games while listening to a pirate radio show called American Nightmare, hosted by the charismatic Caligari (real DJ Chris Ryan). He takes callers and as a Halloween stunt, asks people to call in with their biggest fears. Most of the group participates, relaying their greatest fears, most of which are inspired by classic films and horror tales. Not taking part is Jessie (Brandy Little), still too upset by her sister's disappearance to get into the Halloween spirit. In the shadows of the cafe, Jane is watching the group and more importantly, she is listening to them as well.

It is at this point that I noticed something remarkable. The entire set-up for the film revolves around one very long scene. A round table discussion introduces us the characters, their traits, their backgrounds and everything we will need to know. It is a very lengthy exposition, this one sequence lasting between fifteen and twenty minutes. And the whole thing works because writer-director John Keeyes has written a script so ripe with great dialogue and character development. He has created a level of intimacy that places us right in the center of the group. The scene never gets boring, it never gets dull. Not only are we allowed to sympathize with the characters, they seem like the sort you would call your own friends. It's a perfect moment to also mention the amazing cast that has been gathered. Every single one of these people is a hundred percent convincing. They all feel like real people, therefore the jeopardy the film places them in seems all the more threatening. Even the few people who seem like they might wind up one-dimensional cliches prove themselves to be much more thoughtful and sympathetic that you might expect.

Most of the group heads off to a Halloween party. The only holdouts are Jessie, who opts to babysit her friends' daughter and Wayne (Johnny Sneed), an internet junkie who is also attracted to Jessie. Jane makes herself visible at the party, flirting and shmoozing with the group individually. One by one, she works her way into their confidence and leads them to their death and destruction. Then it comes time to stalk the remaining two people in the group.

But why? What makes Jane so hell bent on eliminating this innocuous group of people? What is her true motive? What makes her so crazy? In truth, you will only discover the answers to some of your questions. The film exists to keep things moving forward, to suggest actions and plot twists that are all the more horrific and disturbing. This is not limited to letting the viewer's own mind wander, contemplating the inner workings of Jane's madness.

By far the biggest revelation is the performance by the Ubiquitous Debbie Rochon. Longtime readers of the site may know I jokingly refer to her as such because she has so many films to her credit, over a hundred titles and most of them within the last ten years. I also happen to be a big fan. I have seen her bring a level of competence and professionalism to many of her roles, even in films that weren't by themselves so hot. I have pointed out the amazing charisma she shows, drawing the viewer in so that we empathize with her whether she be good or evil. She also happens to be an amazingly good sport, and has shown a wonderful sense of humor and comic timing on camera.

But even for those us who have enjoyed Rochon's work in the past, nothing could prepare any of us for the astounding performance she gives in AMERICAN NIGHTMARE. It is, without exaggeration, one of the best performances given by an actress in a horror film within the last few years. It deserves to be praised alongside other triumphs like Emily Haack in SCRAPBOOK and Angela Bettis in MAY. As a villain, she reveals a level of evil, menace and psychosis we haven't seen in a long time. At times screaming in fits of fury, Rochon completely embodies the role of Jane Toppan and she is terrifying to behold. She is one of the cruelest and most unforgiving screen killers we've seen lately. But even in the most shocking and cold-blooded moments which make her one of my favorite horror film icons so far this century, Rochon is able to show just a shred of vulnerability, just a little bit of hurt and pain that says whatever made Jane the way she is, it was just as traumatic for her as it is for her victims.

Rochon also works behind the scenes. She had previously penned the hilarious softcore comedy PLAYMATE OF THE APES, still the most hilarious thing released under the e.i Independent Cinema banner. She also contributed the story and helped produce Keeyes' latest film, SUBURBAN NIGHTMARE.

Jon Keeyes is one of those talents that just leaves you stunned. Stunned not only by the great job he's done, but also by the fact that he didn't immediately become the toast of the town. On an estimated budget of $50,000, he has created a film that was better than any of the big horror films released last year. Everything here plays so much better than your average indie horror film. It looks gorgeous, with beautiful bright color schemes that occasionally sink into mysterious dark shadows. His camera technique is skilled yet unobtrusive. The film never stops being about the story, and never indulges in parlor tricks. Story and raw emotion play hand in hand here, a testament to just what a skilled artist Keeyes both with the pen and the camera.

Keeyes steeps the film in an authentic Texas setting. He throws in a great soundtrack that ranges from traditional suspense-building to some cool rockabilly cuts. Hell, even the credits look great!

Sorry folks, you're not going to hear many criticisms from me this time. I've got nothing but praise for this one. Rarely does a film win me over so completely as AMERICAN NIGHTMARE did. My only word of warning is that if you're the type of person who needs everything wrapped up in a nice little bow, then perhaps you should look elsewhere. This film, while more suspenseful than exploitive, is not interested in treating anyone with kid gloves. It gets very dark and purposely leaves unanswered questions. As for myself, there really wasn't much in AMERICAN NIGHTMARE that I didn't love. 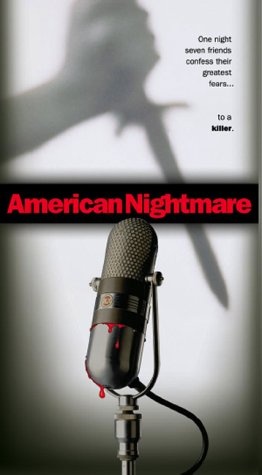