Horror-comedies, eh? What'cha gonna get - horror or comedy? There's a chance you'll get both, but the mix is rarely even. Fright Night is basically a teen comedy; there are other elements, including (near the beginning) some atmosphere, but broadly speaking you watch this for a bit of fun.

Since that's the level on which this film works best, I'll start with that.

The film started badly. As in "I want to kill these teens, please let them die horribly" badly. Charley Brewster was an idiot, his girlfriend was a moody cow and the less said about Evil Ed the better. Admittedly he's *meant* to be a dork. But that doesn't stop him being annoying.

However things got better. Amanda Bearse as Amy Peterson really started to grow on me - and I'm not just talking about *that*. Amy's genuinely sweet. Charley wins our admiration and even Evil Ed becomes tolerable. Peter Vincent, the washed-up old movie star, adds a whole other dimension to the film, being a pompous, venal, touching and ultimately noble coward. With some great jokes. His scenes are always fun. Oh, and I nearly forgot. There's the bad guys next door, who are never more sinister than when they're making you laugh. Chris Sarandon reminded me a little of Eric Roberts, but whatever. Leaving aside the oogie-boogie vampire stuff, he's just a fun character to have on the screen.

It's not aiming for the same marks as Buffy the Vampire Slayer, but it's the same basic set-up. Unlikely vampire hunters (teenage pals with an older guy tagging along as mentor) must kill bloodsucking fiends while squabbling, dating and generally being teenagers. It's a good gag. It works for Buffy and it works here too.

Bottom line: you care about these characters. You can laugh at their misadventures, but you want them to come out okay.

But it's a horror-comedy... so what about the horror?

The thing about vampires is that they should be the scariest things in the world. Imagine someone biting your throat out and drinking the gushing blood. Deaths don't come much nastier. The movie's first act, in which it's just Charley versus the neighbours, has some genuine chills. It's freaky when he sneaks around his house - and as for the bit where he's spying on the vampire... AND HE LOOKS BACK! That's effective.

But eventually we have to see the monster - and he ain't that bad. He's not the nightmare horror that he was when kept offscreen. He couldn't be. Instead he's a guy who makes your friends grow goofy teeth and smooch him on dance floors. That bit's actually quite creepy in a child-molesting sort of way, except that all the men in the audience are going, "You lucky bastard!" And a bit later, "Are we gonna see tits?" I'm guessing that sequence would have scared me more if I was a woman... but maybe not, since the director seems to be trying to turn Chris Sarandon into sex on a stick too.

There's a rip-off... er, *homage*, to Nosferatu. There's also some Stoker-ish vampire lore that's been relatively overlooked these days. However I'd like to complain about Amanda Bearse's see-through nightie, which isn't nearly see-through enough.

At the end of the day, this is an enjoyable movie. You'll only ever once be scared by it, and then only during the first twenty minutes. But I know I'll have lots of fun when I eventually rewatch it. 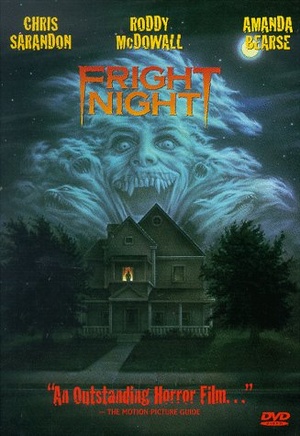