Not to be confused with the 1987 Lamberto Bava film of the same name (aka 'Photos of Gioia'), this is Renato Polselli's 1972 sleazy giallo classic, originally released as 'Hot Delirium' ('Delirio Caldo') in his native Italy. 1972 was a vintage year for gialli, but Polselli's film almost certainly has the dubious distinction of being the most over-the-top giallo of the early 70's, even out-doing Umberto Lenzi's work in the genre in terms of ludicrous plot and crazed atmosphere. Polselli (working here under his regular pseudonym of 'Ralph Brown') is not a well known director, and THE REINCARNATION OF ISABEL is his best known film besides DELIRIUM. He was responsible for some hardcore sex films, including the much-discussed but little-seen 1973 film 'Rivelazioni di uno Psichiatra Sul Mondo Perverso del Sesso' ('Revelations of a Psychiatrist on the Perverse World of Sex' - the film was announced for DVD release by Salvation/Image, but sadly never released).

Herbert Lyutak (Mickey Hargitay, former husband of Jayne Mansfield and best known to horror fans for his role in THE BLOODY PIT OF HORROR/THE CRIMSON EXECUTIONER (1965)) is a psychologist who works alongside the police in a psychological profiling capacity. He's also a demented, psychosexual, impotent murderer. At the beginning of the film, he's sat in a bar having a drink when a young lady's bare legs catch his attention. He overhears her talking on the phone, and offers her a lift to the night club she mentioned. In the car, he begins to act strangely, staring at her legs and eventually touching them. Not surprisingly, the girl becomes worried and wants to get out. Lyutak stops the car and she flees, only to be caught up by Lyutak when she stumbles in a river. He rips her clothes off whilst strangling her, then bashes her with a handy rock. Back at Lyutak's home, we meet his young wife Marcia (Rita Calderoni, Polselli regular, best known for her roles in THE REINCARNATION OF ISABEL and NUDE FOR SATAN), and their woman servant Bonita (Carmen Young). Marcia suspects her husband was responsible for the murder, which we discover was one of a series involving young women. The police confirm her suspicions when they arrive to question Lyutak, having been tipped off by the bar owner. However, whilst this is going on another murder is committed and Lyutak identifies a small-time crook as the killer from a line-up of people found in the area at the time of the murder. Lyutak sets a trap with the police, as he believes he can predict the time and place of the next murder. A policewoman is to be the bait, but a prostitute in the area is killed instead, and the murderer gets away. As things escalate, Marcia starts having visions involving lesbian orgies, chains and Lyutak laughing dementedly. Can the police unravel the mystery of the murders before more victims are found? Will Lyutak be unmasked? Who is the other killer? You'll just have to watch it to find out!

As should be clear from the above synopsis, this is a particularly convoluted giallo. As a matter of fact, even when the murders are explained at the end of the film, it still doesn't make a whole lot of sense. What sets this film apart from the plethora of gialli released in Italy in the early 70's is its sheer craziness. The acting is terrible, though Hargitay and Calderoni's wild-eyed performances are strangely suitable to the general ambience of the film ("You are a hyena! A hyena!" Hargitay screams at himself in the mirror in one particularly deranged scene). There is a fantastic electro-synth score (by the aptly named Gianfranco Reverberi, whoever he might be), which is used to great effect, especially during the weird hallucination sequences. There's plentiful nudity, which is always welcome when it involves Ms Calderoni. There's implied sodomy with a blunt instrument! There's a jaw-dropping scene in which the black-gloved killer masturbates a woman whilst strangling her! There's inept gore and violence (check out the weird whip-type-thing at the end of the film - it looks like it's made of wool)! There's a comedy red herring character who is only ever referred to as 'the parking lot attendant'. And so on - what more could anyone ask for from a giallo?!

I first saw the film on a bootleg of the Dutch VHS release, which features a radically different version of the film to that originally intended by Polselli. Polselli shot a new beginning for the American release of the film, which shows us Lyutak fighting in Vietnam. He's injured and air-lifted in a helicopter, on board which is a female GI who looks strangely familiar... Other Vietnam flashbacks were inserted in places during the film, and a tacky alternative ending was also filmed. In addition to this, there are two extra murders, which alter the character of Lyutak quite considerably, making him an even less sympathetic character, if that's possible. The Anchor Bay DVD release of DELIRIUM features both of these versions, though the opening Vietnam footage on the American version is taken from the Dutch VHS release and is very ropey indeed. The American version is certainly inferior in my eyes, and there is a large difference in run time (US version - 85 min, international version - 102 min), indicating the quantity of footage excerpted from the original version. On top of all that, the French release of the film features additional sexual imagery not present here.

I didn't actually enjoy the film as much as I thought I would, watching it again after several years. It's really rather silly in places, with a complete lack of tension thanks to the atrocious acting of the murder victims. Undoubtedly it has redeeming characteristics, the most obvious being the genuinely weird hallucination sequences, which recall those filmed by Fulci the previous year for his masterpiece A LIZARD IN A WOMAN'S SKIN in that both feature psychedelic scenes of lesbianism involving the unhinged heroine, though Fulci's were much more stylishly done. It's also worth noting that Joe D'Amato's infamous 1979 film BUIO OMEGA (aka BEYOND THE DARKNESS/BLUE HOLOCAUST) borrows a fair few plot elements from Polselli's film.

The DVD is the ideal way to experience the film, and there's a fascinating featurette in which Polselli and Hargitay (both of whom seem surprisingly normal) discuss the film's production. Note that the inernational version is presented in Italian language, with optional English subtitles. 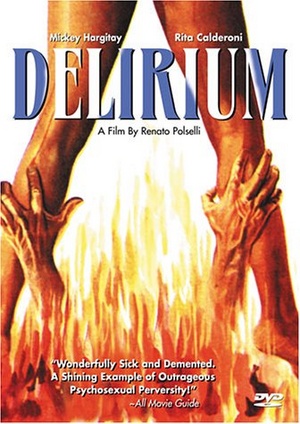